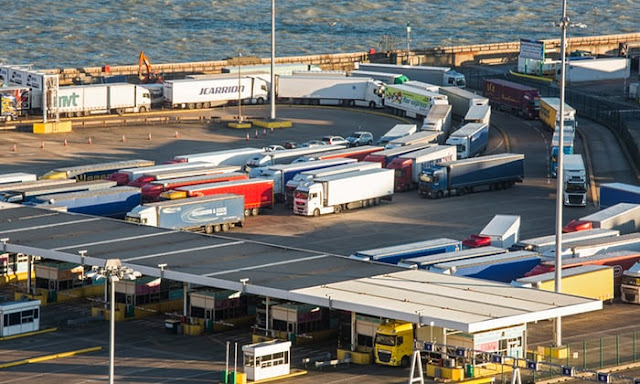 In my previous posts, I looked at how leaving the Customs Union results in:
In this post, I will look at the impact of a new Customs Border on UK-EU trade.

At present, UK customs operations are governed by the Union Customs Code (UCC), some 1300+ pages of EU legislation. Entering into effect on 1 May 2016, with implementation planned up until 31 December 2020, the UCC provides new framework regulation for modernised customs rules and procedures throughout the EU. The stated aims of the UCC are simplicity, service and speed. On leaving the EU, the UK will need to implement its own customs legislation. The Great Repeal Bill will adopt the UCC, suitably amended for the UK customs territory. Post-Brexit, the UK and EU will view each other as “third countries” with mirrored customs regulations for handling imports/exports.

Dispatching Goods in the EU

Movement of goods within the EU's Customs Union are not termed as imports/exports – goods are “dispatched” from the originating state and deemed as “arrivals” at the destination state. This process is simpler than import/export processes for third countries and can be undertaken electronically, but there is still an administration burden:
Although "arrivals" are not subject to any customs formalities, checks on goods are undertaken on the basis of risk analysis to target inspections on “high-risk” consignments and allow rapid passage of “low-risk” consignments. Paraphrasing Jim Harra (HMRC) from his evidence to the House of Commons Treasury Committee :
Customs Processing as third country

Border Crossing Costs. During the Referendum Campaign, HM Treasury's “Analysis of the economic impact of EU membership” suggested that the new customs border could add 24% cost to transaction values. But as explained by Open Europe's analysis, this figure is based on an OECD range of 2-24%, with the 24% applying to much less developed economies. For the UK, this figure is more likely to be in the 2% region, which tallies with an earlier HM Government FoI response (page 5) estimating the cost at 2% of transaction values and analysis at “The Door To Freedom” blog post.

Customs Declarations In evidence to the Treasury Committee, Helen Goodman referenced a 2006 study by KPMG suggesting customs procedures cost £800m pa, with customs declarations for non-EU goods amounting to a third of this total. Goodman also related that agents can act on behalf of small firms at a typical cost of €20 and €80 per declaration. In evidence to an Irish Parliament Committee, Carol Lynch, (BDO Ireland), suggested an agent cost of €100 per movement would apply to a post-Brexit border in Ireland - a heavy burden for SME's.

Capacity Last year 4.4 million driver accompanied freight vehicles moved between the UK and continental Europe, primarily via Dover ferries or Channel Tunnel shuttle (RHA Brexit Analysis). Roll-on / Roll-off (Ro-Ro) freight is 78% UK-EU trade (BIFA on Brexit) and 99% of traffic at Port of Dover (Dept of Transport). Delays introduced by routine customs controls and checks would seriously impact the ports and roads in and out of them – and impact time-sensitive supply chains. HMRC expect a five-fold increase in customs declarations when UK leaves the customs union, a huge impact on its IT systems.

Road Haulage The UK Road Haulage market will face changes following Brexit (TheRoad Haulage Association (RHA)). Under the current EU regime, truck drivers are licensed to drive throughout Europe without the need for permits at every border. Cabotage rights allows haulage companies to provide domestic haulage in all european markets as well as international haulage.

Rules of Origin (RoO) (Open Europe's 2014 Brexit Report assumed a cost of 4% of transaction values), VAT (payable on imports although can usually be reclaimed), Entry Summary Declaration (ENS) requirement for third country imports to the EU – all will add burdens to business.

Ireland The land border between Northern Ireland and the Republic of Ireland is 498km long with over 300 crossing points. Since the end of the Troubles, it has been an an open and invisible border, cutting through villages, fields and in some cases even houses. The prospect of a customs border in Ireland replacing the current relatively frictionless and invisible border is the cause of much understandable concern.
Mitigations for new Customs Border

The impact of a new customs border can be mitigated by simplified customs procedures and investment in technology and infrastructure. The aim will be a customs process that is electronic as far as is possible, with declarations submitted and cleared in advance, simplified customs processing for trusted / accredited traders & speedy passage through customs, with checks performed away from the border wherever possible. As Charlie Elphicke MP states in his paper "Ready on Day One", "the border should be a tax point, not a search point".

Trade Facilitation. The 2013 WTO Trade Facilitation Agreement (TFA), to which the EU is a signatory,“expedites the movement, release and clearance of goods crossing borders” (RobertJ. Bowman).
Authorised Economic Operator (AEO) is defined by the WCO SAFE Framework of Standards as a party involved in the international movement of goods approved by a national Customs administration as complying with WCO or equivalent supply chain security standards.
Infrastructure. The Channel ports are already struggling with daily traffic of 10,000 HGVs, projected to rise to 16,000. Investment in capacity is a necessity even without the complications of increased declarations, inspections and concomitant delays. Charlie Elphicke MP in his paper "Ready on Day One" has recommended investment in roads approaching Dover to provide a resilient road network: build the new Lower Thames Crossing; widen the M20, dual the M2/A2 all the way to the Channel ports; build the Stanford West lorry park on the M20 (Govt has put aside £250m for this project).

Technology. Modern technology will be required to optimise customs clearance :
Special Status for Ireland. There is much discussion of the Norway-Sweden border as a model for Ireland post-Brexit : designated roads for freight to clear customs; potential use of ANPR technology; formal checks undertaken at locations away from the border etc. But this will still require customs formalities for goods crossing the border, which will heavily impact companies with supply chains and/or operations that traverse the Irish border – especially SMEs. An ex-Irish customs officer (@robmurphybe) tweets regularly on the issue of Brexit, customs and the Irish border – including a thread in June on a special case for Northern Ireland customs arrangements, in which he suggests :
Conclusions

Leaving the Customs Union will result in a new customs border between UK and EU with routine customs controls and customs declarations at the border. Trade facilitation measures plus investment in IT and infrastructure provides the potential to reduce the trade friction introduced by a new customs border, but there is plenty of work for the UK government to undertake in preparation.

But it is also true to say we will be dependent on the EU being ready for a new Customs border. David Davis recently suggested that getting French, Belgian or Dutch customs ready in two years will be difficult and that is why a transitional period may be needed.

This is disingenuous from Davis. The replacement of HMRC's IT system CHIEF with CDS is not scheduled to go-live until January 2019, just 2 months before the UK leaves the EU. Furthermore, many of the important upgrades will occur in a phased timetable over 2019-20 (e.g. AEO upgrades are scheduled for October 2019). This timetable is broadly in line with the EU's Customs 2020 program, which will see UCC upgrades being implemented across all EU member states. Unfortunately, the Treasury Committee reports there has been a collapse in confidence in CDS since HMRC presented evidence to the Treasury Committee in Feb 2017. There is a significant risk CDS will not be ready by March 2019. There is also anxiety regarding the Channel ports (Dover &Channel tunnel) and lack of space / resources to cater for the additional burden of customs formalities for EU imports.

Given this dependency on timely delivery of UK Government IT and infrastructure projects and completion of the EU's customs 2020 program, a transitional period extending current customs union arrangements would seem to be a necessary step to achieve a smooth Brexit. This would also allow time to design and implement streamlined, facilitative and quick customs processes for the new UK-EU Customs border, as well as time for businesses to adapt to new processes.

Agreement with European partners will be needed for a transitional period and special arrangements for Ireland. Other important agreements will be needed: e.g. continued recognition of existing EORI registrations, AEO mutual recognition, Common Transit Convention, Community Licence for road haulage, maintaining customs co-operation and information exchange etc. A comprehensive customs agreement will be needed – a subject I will cover in my next post.


I have referenced the following papers/documents in this post which are also worth reading for more details:.