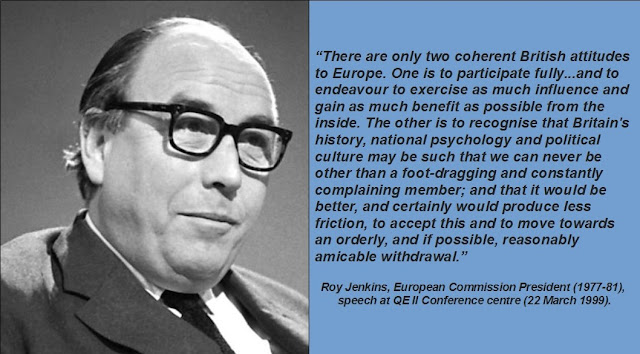 The EU Question: should we stay or should we go ?

I started this blog in 2015 ahead of the EU Referendum (held 23rd June 2016). I supported Leave, primarily because I did not believe the process of surrendering more and more governance to a remote bureaucracy was good for democracy or for the future prosperity and freedom of our country. I also believed the EU incapable of  reform and David Cameron's attempts to renegotiate our membership proved that spectacularly.

Ultimately of course, Leave won the Referendum. In truth, Britain's commitment to the EU had been half-hearted at best. Roy Jenkins description in 1999 of a "foot dragging and constantly complaining member" seems to accurately describe Britain regarding the EU's driving ambition to forge a single European state. On reflection, a parting of the ways seemed inevitable at some point or other.

Moreover, it is clear that the EU, freed from the hindrance of a reluctant Britain, is pressing on with political integration. An EU army, described as a "dangerous fantasy" by Nick Clegg as recently as 2014 is now clearly on the agenda. It is clear there is no way for Britain to return to its previous ambivalent position within the EU. The status quo ante has gone forever.

So based on this recognition that we do not share the European dream of a single state, we should follow the course advised by Roy Jenkins in 1999 "that it would be better, and certainly would produce less friction, to accept this and to move towards an orderly, and if possible, reasonably amicable withdrawal."

This blog is now focussed on how we should leave the EU. I aim to look at the technicalities, especially on trade and economy and try to identify solutions. I hope you find this blog of value.