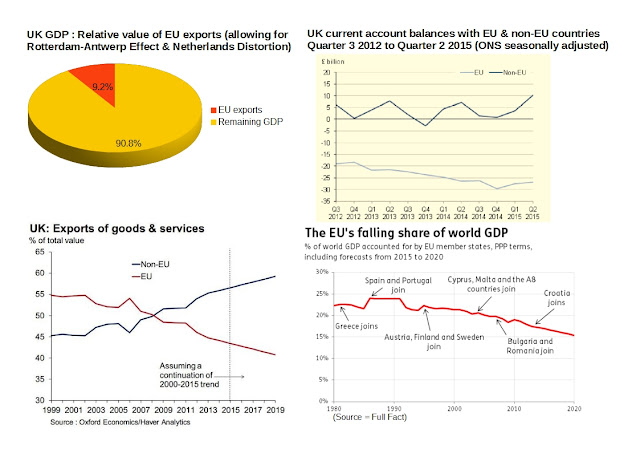 In a series of posts, I'm aiming to discuss the "Single Market", one of the major topics of  the EU Referendum.  In this post, I will be looking at UK trade with the EU.

UK Exports as a proportion of UK economy

However, the ONS figures overstate the real level of UK exports to the rest of the EU, due to 2 separate distortions:
- "Rotterdam-Antwerp Effect" where exports destined for non-EU countries are routed via the ports of Rotterdam or Antwerp and so are recorded as exports to Netherlands or Belgium,
- "Netherlands Distortion", where investments and subsequent income are channeled through  "brass-plate" holding companies for tax purposes by investors domiciled in other countries.

The ONS figures for 2014 show a UK trade deficit with the EU of £61 billion, i.e. we bought more goods/services from EU states than EU states buy from us.  In fact, a trade deficit has been an enduring feature since the UK joined the then common market in 1973 (despite having been in trade surplus with Europe during the 1950's and 60's). The table below is based on ONS statistics and has been extracted from Business for Britains "Change or Go" document.

This deficit has widened appreciably in recent years, due in part to the on-going Euro crisis, which is depressing demand from most Eurozone states and providing an artificial boost to German export competitiveness.

Although the UK has historically recorded a trade in goods deficit with the EU, its trade in services balance with the EU is much more favorable, running a surplus in each year since 2005, which reached £15.4 billion in 2014.  While the Single Market was theoretically implemented in 1992, there is unfortunately still no effective single market in services and little progress is being made to remove trade barriers in services - which is a particular disadvantage to the UK (ranked number 2 in services globally after the USA).


UK Trade with Rest of the World

By contrast, the UK's trade with the Rest of the World is typically in balance or surplus, as per the ONS seasonally adjusted chart for 2015 Q2 in the diagram at the top of this page.  UK exports have been re-orienting away from the EU and towards the Rest of the World since before the millennium, reflecting the fact that the EU is a declining market place in the world, down to 17% of Global GDP and forecast to fall further.  Global markets provide the best prospects for UK trade growth and trade balance.

It is an oft-repeated claim that membership of the EU gives the UK an essential trade advantage. However, a detailed analysis of UK export figures 1960 - 2012  (undertaken by Michael Burrage for the cross-party think tank Civitas) shows no positive impact on UK trade with other members. Britain's trade with other EU nations accounts for no more of its trade with all leading economies than it did on joining the European Economic Community in 1973; UK exports to non-EU nations Iceland, Norway and Switzerland have increased enormously over the same period.

"It is similarly hard to accept the idea that there are disadvantages to non-membership, since the exports of goods and services to the EU of so many ‘voiceless’ and ‘powerless’ nations, both developed and less developed, who had never been ‘at the table’ or even ‘in the overflow room’, have grown faster than those of the UK."

It would be wrong to suggest that the UK's trade deficit is entirely due to membership of the EU. The UK has historically suffered from lower productivity, skills levels and investment compared with the likes of France, Germany, Netherlands etc. UK governments have shown themselves quite capable of pursuing damaging policies without assistance from Brussels.

Nor is trade with the EU the fount of all prosperity that it is often portrayed as.  UK exports to the EU contribute less than one tenth to UK GDP - as per calculations above and in line with a 1999 report from the National Institute of Economic and Social Research (NIESR) which looked at how many jobs were linked to trade with the EU.

The myth of "one-in-ten / 3 million jobs at risk" derives from the 1999 NIESR report.  As reported in the Telegraph, Britain in Europe (campaigners for UK to join the Euro) used this report in 2000 to claim that these jobs "depend on the EU".  Dr Martin Weale, the director of the NIESR, was so outraged by this misuse of his study that he called it “pure Goebbels”, and said “In many years of academic research I cannot recall such a wilful distortion of the facts.”  His report had in fact concluded that almost all of these jobs would exist whether Britain were a member of the EU or not.


The political reality is that it will be in everyone's interest to ensure continuity of trade.  If 3m jobs are at risk in the UK, then 5m jobs are at risk in the EU (given the UK's trade deficit with the EU). Furthermore, trade is now incredibly inter-dependent.  For example, the UK manufactures and exports car engines which are often incorporated into German cars subsequently imported to the UK. Complex international supply chains are at the heart of modern commerce.  An abrupt halt to trade between EU and UK would risk a "cardiac arrest" for international trade.

The key question is does trade with the EU have to entail integration in the political structures of the EU ? There are many trade blocks around the world (e.g. NAFTA, ASEAN etc), but only the EU requires political union of its members and removes the right of veto.  Fortunately, membership of the European Union and participation in the Single Market are not one and the same, as we will explore in a subsequent post.

Posted by Paul Reynolds at 11:43 No comments: