Foundation of the EU - Supra-national not Inter-national 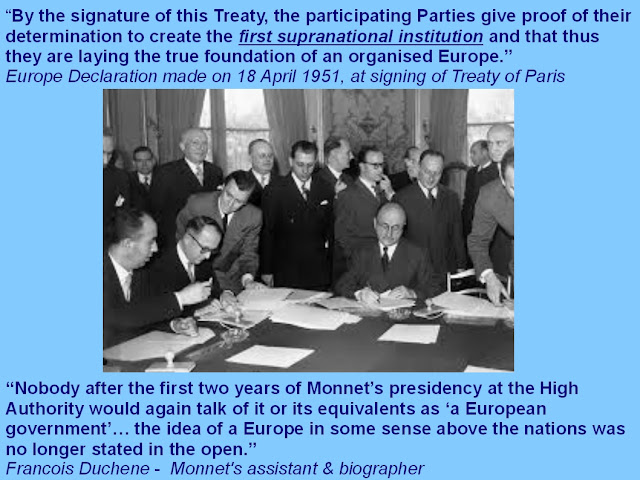 In this post,  I will try to briefly highlight the foundation of the EU and in particular the tension between the "Supra- national" EU and British preference for "Inter-national" co-operation (i.e. an "Intergovernmental" approach).  Once again, I have gleaned this primarily from “The Great Deception” written by Christopher Booker and Dr Richard North –  available to download as a PDF here.

In the aftermath of World War Two, Britain was at the forefront of international co-operation that led to the founding of many "inter-governmental" institutions, including:

Britain's "Intergovernmental" approach to Europe was an anathema to Monnet, characterised by his verdict on the OEEC "the OEEC’s nothing: it’s only a watered-down British approach to Europe – talk, consultation, action only by unanimity".  At the end of the 1940’s Jean Monnet renewed efforts to establish a “Supranational” United States of Europe based on the model described by Salter - in diametric opposition to Britain's approach.

A hallmark of Monnet's approach was to use a "beneficial crisis" and then advance his ideas via a public advocate.  In spring 1950, French demands regarding West Germany's coal & steel industries were the "beneficial crisis" and Robert Schuman, the French Minister of Foreign Affairs was his advocate.  On 9 May 1950, Schuman made a declaration (prepared by Jean Monnet) proposing integration of the French and German coal and steel industries:

"Through the consolidation of basic production and the institution of a new High Authority, whose decisions will bind France, Germany and the other countries that join, this proposal represents the first concrete step towards a European federation ...."

The European Coal & Steel Community (ECSC) was founded by the Treaty of Paris in 1951 when The Six members states (France, West Germany, Italy and the 3 Benelux states) handed over control of their steel and coal industries to this new “supranational” organisation.   “Qualified Majority Voting” was used in the Council of Ministers.  Jean Monnet became the first President of the “High Authority”.


Monnet then proposed a ‘Supranational’ European Defence Community (EDC), with a European Army run by a European minister of Defence and Council of Ministers, a common budget and common arms procurement policy.  Rene Pleven (French Prime Minister) was the public advocate, but the initiative met with sustained opposition and eventually failed.  Consequently, Britain led in the creation of the "Intergovernmental" WEU to provide mutual defence.  It is worth noting that from 2000, the WEU’s capabilities were transferred to the EU and the WEU was wound up in 2011 - there have since been fresh moves within the EU to create a Single European Army.

In response to the rejection of the EDC, there was a change of tactics: the language was changed with phrases such as “European Government” and “Federal” being avoided; as exemplified by the Francois Duchene quote at the start of this blog.  Political integration was to now proceed under the guise of economic integration.

Monnet resigned as President of the High Authority and began work on "economic" integration. Paul-Henri Spaak (Belgian Foreign Minister) composed The “Benelux Memorandum” (based on a draft by Monnet) which called for a Common Market including integration of transport, energy, nuclear energy and social legislation.  Tellingly, the phrase “United States of Europe” in the original draft was removed to give more emphasis to the idea of an “economic community”.

Spaak rejected Britain & Ludwig Erhard's suggestion of a Free Trade Area using the existing OEEC governance, as it  ‘offered no prospect of a European political union’.  Instead, the Common Market was implemented as a Customs Union with a common external tariff wall erected against non-members – i.e. focussing on integration within the European Economic Community rather than an expansion of free trade.

The Common Market treaty was signed in 1957 in Rome.  Although commonly believed to be a purely economic agreement, the Treaty pre-amble includes the declaration to ‘lay the foundations of an ever-closer union among the peoples of Europe’.

Subsequent treaties have continued the transfer of powers from the member states to the “Supranational” EU.  Executive power is held by the European Commission, the equivalent to Salter’s “Secretariat”, a body of civil servants who owe loyalty to the EU, not member states.  Most decisions are via Qualified Majority Voting, i.e. national vetoes have been mostly eliminated.   Just as Salter & Monnet envisaged.

There is a historic difference between the "Supra-national" nature of the EU and Britain's preference for "Inter-national" co-operation, which helps explain why the UK has never felt comfortable inside the EU and why the UK is often seen as the “awkward” member.

It should also be understood that the EU is something of an anomaly as the only recognised Supranational Union in the world.  By contrast,  the "intergovernmental" organisations created after WW2 are still the dominant global institutions, i.e. UN, NATO (which has been the cornerstone of Europe's defence & security for almost 70 years), IMF & World Bank (which still underpin the world's financial systems) and GATT / WTO, which has been the major force enabling Global trade.  Crucially, the WTO along with a plethora of other "intergovernmental" institutions (e.g. UNECE, ILO, Codex Alimentarus etc) is driving the emerging Global Single Market which has effectively made the EU redundant as a law-maker for the Single Market.

Fundamentally, the choice for Britain in the Referendum is the same as it has been for the last 65 years:

Posted by Paul Reynolds at 12:47 No comments:

Email ThisBlogThis!Share to TwitterShare to FacebookShare to Pinterest
Labels: History

Origins of the EU - An Old Idea 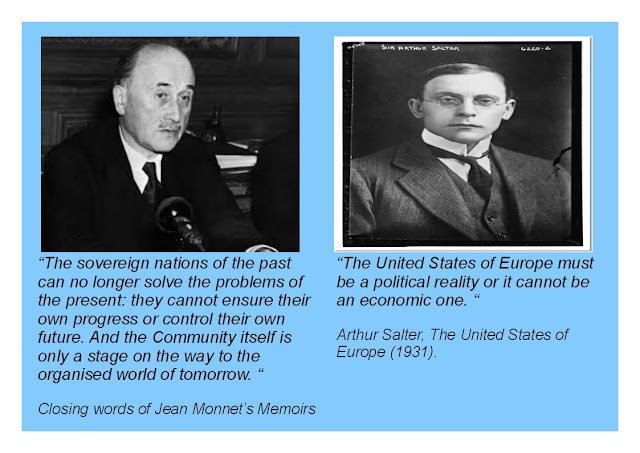 In this post,  I will try to briefly highlight the origins of the EU.  I cannot take any credit for the information, I have gleaned this primarily from “The Great Deception” written by Christopher Booker and Dr Richard North – a meticulously researched and detailed account of the European project.  I regard this book as essential reading for anyone who wishes make an informed decision at the EU referendum.  This book is available to download as a PDF here.

It is commonly believed that the concept of the European Union developed following World War II.  In fact, the essential ideas of the European Union emerged as a response to the horrors of the Great War, for example:
·     Federal Europe or “United States of Europe”  based on the Amercian model, e.g.:.Giovanni Agnelli published ‘European Federation or League of Nations’ in 1918, the Pan Europa movement founded in 1922, Aristide Briand (French Prime minister) published ‘Memorandum on a European Federal Union’ in 1930.
·     Coal & Steel Union to transfer industries crucial to waging war from nations to a “higher authority” and as a first step to establishing a “United States of Europe”, e.g.: Louis Loucheur (French Armaments minister 1917/8, Minister of Finance 1925/6); Pan Europa; “International Steel Agreement” brokered in 1925.
·     Customs Union or Common Market as a means to achieving economic integration leading to Federation e.g.: Sir Max Waechter (1924); French economist Charles Gide, supported by Pan Europa (1924); Louis Loucheur (1927).
·     Franco-German Collaboration Aristide Briand & Gustav Stresemann (German Foreign minister) shared the 1926 Nobel Peace prize for their work on the Treaty of Locarno (which guaranteed mutual security for France and German) and championed Franco-German economic collaboration and a “United States of Europe”.

However, it was two close friends & senior officials in the League of Nations, the Frenchman Jean Monnet and his British colleague Arthur Salter, who did most to provide a blueprint for the future European Union:
At the heart of these initiatives was an attempt to bind Europe together politically and economically, particularly France & Germany, to avoid another war.  As Churchill put it :

“…the aim of ending the thousand-year strife between France and Germany seemed a supreme object. If only we could weave Gaul and Teuton so closely together economically, socially and morally as to prevent the occasion of new quarrels and make old antagonisms die in the realisation of mutual prosperity and interdependence, Europe would rise again.”

Ultimately, these initiatives failed to prevent World War 2. Nationalist resentment in Germany at the terms imposed by France at Versailles combined with the Wall Street Crash and ensuing Depression provided the platform for Hitler’s rise to power. The world that emerged after World War 2 was a very different one:


In the late 1940’s,  Jean Monnet renewed efforts to establish a “Supranational” United States of Europe, establishing the European Coal & Steel Community (ECSC) in 1951, culminating in the European Economic Community (EEC) established by the Treaty of Rome in 1957, based on the blueprint provided by Salter in 1931.

However, given the changed reality of the post-war world, was this idea still relevant ? If the ECSC and EEC had not been created in the 1950’s, is it really possible to believe that a new European war would have erupted ? Was the EEC any guarantee of peace in the Cold War between the two super-powers (USA & USSR), which reached a near-disastrous climax during the Cuban Missile crisis ? If NATO had not been formed and the USA had returned to its inter-war "isolationism" would peace have been sustained in Europe and the Soviet threat countered simply because of the formation of the ECSC and EEC ?  If the answer to these questions is no, then it begs the ultimate question :  why do we need a "Supranational" United  States of Europe, a government of unelected bureaucrats with power over nation states ?
Posted by Paul Reynolds at 17:58 No comments: